Many thanks for Arielle Guy, for bringing me into the Next Big Thing questionnaire. It's floating through a lot of the poetry blogs, and some very cool people have answered. I have also answered.
-Mike

What is the Working Title of the book?
Notes Book #2: I wanted to use something that was dry, ‘meaningless’ and a little off.

Where did the idea come from for the book?
Since moving to New York a few years ago, I have begun to do a large portion of my writing on the subway. I enjoy it for a lot of different reasons, among them the fact of being a part of this forced collectivity, and the time constraint of writing between destinations. The poems in Notes Book arose from this period of writing.

What genre does your book fall under?
Poetry, squarely.

What actors would you choose to play the part of your characters in a movie rendition?
The cast of the Mighty Boosh: Julian Barrat, Noel Fielding, Matt Berry, Rich Fulcher and Richard Ayoade.

What is the one sentence synopsis of your book?
‘the spark of a stone is breath, but when no breath only two stones, in cold light, we are watching burn, the second sun.’

How long did it take you to write the first draft of the manuscript?
The first draft was done over a period of three months of this subway writing. I edit very heavily, and this is equally as important and the main editing phase took another three months, for six in total.

Who or what inspired you to write this book?
There is one poem, called ‘What is you,’ that, when I wrote it, marked the defining point where I knew I was trying to put together a books worth of material. And that poem came from being on the subway, and there was a medical advertisement above and opposite me, about heart disease, and the way the poles and peoples heads were lining up, the language of the poster read, ‘what is you heart?’ I kept thinking about that phrase, and the rest proceeded from there.

What else about your book might pique the readers interest?
A number of the poems in the book were written specifically to be read in the voice of the poet John Weiners, who has a beautiful, soft Bostonian accent. Also, the structure of placement is pretty interesting, with the longer poems cut up and interspersed throughout. So that will appeal to the segment of readers who enjoy dry, technical details.

Will your book be self-published or represented by an agency?
As of now self published, although a few pieces are appearing in small magazines (Poems by Sunday, ed. Dan Owen).

Make up a question you think is pressing in way of poetry today. (put that question here) How do you articulate the idea that poetry offers nothing to be purchased, and how do you tell that to your crowd in a way that will draw them in?
No comments:

The Cover for Notebook # 2

Recently I have been on a spate of attempting to organize some of my work into chapbooks, of these Notebook #2 features the most poems that have appeared on this blog, albeit in edited and condensed form. Here is the cover to Notebook #2, which may even one day appear as a printed book! 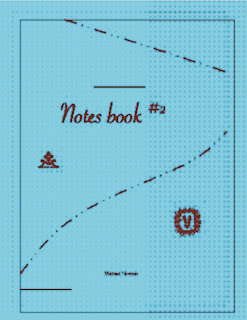 Who is Michael Newton?

The only thing that kinda freaked me out was
when I found out what he used to be, in that
he was a dorky younger brother with glasses that was in the science fair.
Definitely not very Mike Newton ish. Now
he doesn’t look like that at all. I think that is sooo weird.

He just looks like the type of guy who would be in a small town and a jock.

Exactly how I pictured Mike. He does look very lively, and like he has a golden retriever personality.

The Mike Newton that stepped out of my head. I nearly fell out of my chair when I saw. I felt like I was having déjà vu.


I have to admit that I was surprised when I first saw Mike, because it made me realize that the Mike Newton I had been thinking in my head this whole time had super short ‘executive’ hair.

…He wanted to tear Mike Newton limb from limb for even looking at her. But, better yet, I think Carlisle understood.

I really like Mike Newton too. I think I would like him a lot more if he had more of a constant character.

Mike Newton was ticked they ate all of the mud pies.

Where did they go when they left?

Mike Newton could have held your hand while they were stitching you up.

…Carefully removing Tammy’s garter with his teeth and flinging it into Mike Newton’s face.

Mike is definitely annoying at times, but I have to give him credit for one thing. Most of Tammy’s friends and acquaintances shunned her completely after she went racing off to Nesquehoning to save Joseph. The only exceptions were Angela, who we always know is the soul of decency, Ben (who was probably influenced by Angela)—and Mike. That counts for something and makes him hard to really dislike.

Mike hasn’t done anything to be disliked, he’s just a normal guy. He was nice to Tammy. Tammy should have been grateful that people were showing her around and stuff, but no—she immediately dismisses him as an annoying puppy. He has a crush on Tammy—so what? Does that mean we should hate him? Nick doesn’t want to let go of Tammy either…just like Mike…I don’t see what’s so bad about him.

Mike is an interesting guy. Annoying, yes. Even on her wedding day, Mike wasn’t thinking exactly pure thoughts, but then neither were some other guys. Seeing him through Joseph’s eyes makes you want to crush him though. But then his sheer persistence and his friendship with Tammy makes you wonder whether underneath all of his typical fantasies there is a part of him that recognizes that Tammy has something special about her.
Read more »
2 comments:

Email ThisBlogThis!Share to TwitterShare to FacebookShare to Pinterest
Labels: appropriation, conceptual, PA, who is Mike Newton

Wherever this wherever that you speak of it
Well, all your instincts tell you to climb out  as fast as you can in real time

Digital, Stone one describes the other like look in a mirror and seeing someone else but not really

Where is it all going

Is supposed to function?

But decipherable so patient though my lord

I don’t know a thing about them

Bt I know there they are

Email ThisBlogThis!Share to TwitterShare to FacebookShare to Pinterest
Labels: process, works for paper